Wikipedia does a great job of explaining the current state of this term. They present the various uses of the term when it comes to identity and politics. Although I acknowledge that there are those in the LGBTQIA spectrum that cringe sometimes at the use of the word, since I have embraced it in my theoretical, literary, and translation research and practice, I have found using it liberating.

Queer to me is a moving target. I like that it is hard to pin down and rough around the edges. It underscores the resistance that I feel as an integral part of identifying with the term. In fact, the whole series of articles on Lesbian, gay, bisexual, and transgender(LGBT) people that Wikipedia has are quite informative. Undoubtedly an exploration of these articles will help you to decide what is comfortable for you, personally. However, in this collective we embrace the use of this term and its meaning as “non-normative.”

What do queers want? 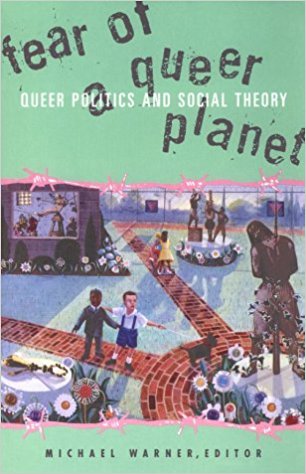 Now, I want to draw your attention to the introduction of a book by Michael Warner entitled Fear of a Queer Planet in which he provides a historiographical and theoretical discussion about the origins of queer theory, the challenges we have faced and are still facing, and where current theorizations are taking us.

Michael Warner, author of Fear of a Queer Planet,[1] is critical of left leaning social and political theories that have been unwilling to ask a simple question. What do queers want? Warner is troubled because, rather than posit theoretical discourses that include queer lives in contexts other than sex, “they have posited and naturalized a heterosexual society” (vii). Queer lives are often theorized as the binary opposite of heterosexual lives within the social realm. Heterosexual desire is sublimated while queer desire is subordinated at best, for queer lives are often kept in the shadows of thought. The social realm Warner identifies, “is a cultural form, interwoven with the political form of the administrative state and with the normalizing methodologies of modern social knowledge” (xxvii). The knowledges produced in theoretical discourses often become part of the archive of the administrative state apparatus. Therefore, queerness must become part of the archive and the process of creating society itself. Queer actions, facts, events, patterns of thought or ideas “must first be seen, heard, and remembered…into things—into sayings of poetry, the written page or the printed book, into paintings or sculpture, into all sorts of records, documents and monuments” (Arendt 95).[2]  The question of what do queers want must be clearly and convincingly answered by turning the factual world of queer lives into tangible objects through the act of remembrance.

Warner has edited this volume to engage political theorists with queer experiences, so queer concerns and protests can take center stage rather than be relegated to mere footnotes. He argues, in a nod to Hannah Arendt’s The Human Condition, that this can only happen if theorists can “hear the resonances of queer protest [as] an objection to the normalization of behavior…and the cultural phenomenon of societalization” (xxvii). Queer lives become visible when people “can see and hear and therefore testify to their existence” (Arendt 95). In other words, like Arendt, Warner posits that new queer politics must make queer desires visible through the outward and constant manifestation of queer existence. Furthermore, new queer politics must be both deliberate and self-reflective—equally critical of all normalizing discourses, including queer ones. Therefore, in a world conceived as a heterosexual society, “we might say that queer even says that queer politics opposes society itself” (Warner xxvii). Warner has divided the book into two parts. The first collection of essays contest theoretical traditions, which he labels heterotheory, in the fields of “anthropology, Marxism, psychoanalysis, psychology, and legal theory,” (vii) whereas the second, which he labels The New Queer Politics, deals with “current issues in queer culture: shifting styles of identity politics; intersections of nationality, race, and gender; conflicts over the state and the media; and the building of new cultures” (vii). Warner wants readers to regard the essays of this volume as being both steeped in “skepticism about knowledges of the social” and “reflecting the modern conditions of queerness” (xxvii).

“You may forget, but let me tell you this: someone in some future time will think of us.”

[From If Not, Winter: Fragments of Sappho (2003), translated by Anne Carson. New York: Vintage.]

“Translation is planned rewriting…translation represents one of the most privileged tools for the negotiation and reproduction of gender and identities. It evokes the current discursive conflict between female and male, between gender normativity and queer identities, and performativity.”

“It is crucial to consider different sexualities and bodies when discussing identity in translation. Analogous with translation, diverse sexualities have always occupied a secondary position in mainstream society, often trying to negotiate a space for themselves in opposition to heteronormative culture, always articulating their visibility and invisibility in society. Therefore, it is only logical that these two important fields of human experience and knowledge, Queer Studies and Translation Studies, should work more closely together in order to inform one another and benefit from each other’s research and insights.”